Madison Elle Beer born March 5, 1999, is an American singer and actress. She gained media attention after pop star Justin Bieber tweeted a link to a video of her singing “At last” of Etta James.She began her career by posting covers on her channel YouTube Channel. She sang the theme song for the fashion doll franchise, Monster High, titled “We Are Monster High.”She collaborated with Cody Simpson on the song “Valentine,” which aired on Radio Disney. 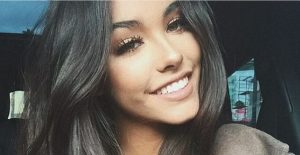