Melesha O’Garro, better known by her stage name Lady Leshurr, is a rapper, singer from Birmingham, England. She decided that writing music would bring her to a wider audience, releasing her first mixtape at age fourteen. She better known for her rap freestyles : Queen’s Speech.

She was the winner of Best Female Act 2015 at the UMA. In October 2011 Leshurr was described as “the one to watch” by Paul Lester of The Guardian. Her primary influences are Eminem and Missy Elliott. 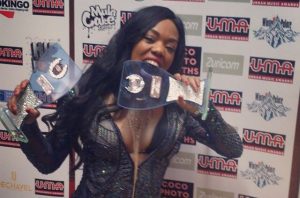